Art 5/19/44 Players: Injury/Substitutions/Special Situations (Minor): clarifying when a player who receive an assistance is treated as an injured player. If the game is stopped for:

THE PLAYER MUST BE REPLACED!
This is to eliminate interruptions in the game and manage the delay in the game resumption more consistently. Assistance can be on a shoe, a contact lens, loss of a taping, a problem with the game uniform, etc…

In the clip1 / just before the ball is at disposal to 3red a red team personnel assists the player by applying a black patch over the not allowed mark of the compression sleeve. The lead referee, correctly, requires the substitution of 3red who leaves the playng court.
In the event of a correctable error involving the player replaced for having been assisted, who has committed his fifth foul or has been disqualified, his substitute must participate in the correction of an error (Art 44.2.5).

Art 15 /Player in the act of shooting (AOS) (Major): there is a new definition for shooting and for continuous movement – note that we are talking about movement – not motion 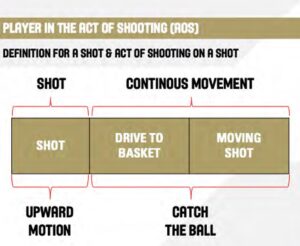 The rule change intended to improve for players, coaches and referees to understand of whether the foul was committed in AOS or not. It Introduces consistent concepts with how the game is played, there being two types of AOS: the shot and the continuous movement. The continuous movement is divided into two parts: “drive to the basket” and “moving shot”. In every play referees should be able to identify whether the player in AOS was in “shot”, “drive to the basket” or “moving shot”. This requires more of the basketball knowledge as understanding the player shooting techniques, than just knowing the rule.

NEW DEFINITION:  Stationary shot: a classic example is the classic jump-shot. The player is not moving and is not progressing either without the ball or in dribbling.

NEW DEFINITION: Continuous movement. It covers two situations: drive to the basket (catch the ball moving or at completion of the dribble) and moving shot ( continue with the shooting movemen without stopping)

Clip 1: 55red after gathering, the stop and shooting fake , with both feet on the ground, begin the upward movement of the arms and is foled by 8white. 55red is in AOS, the foul had to be sanctioned with 2 free throws. (Foul contact occurs when there are still 0.2″ on the 24″ display).
Clip 2: 1yellow, is fouled by 10blue before gathering the ball. 1yellow when the contact occurs is not in AOS, he hasn’t complete the dribbling. The foul could be sanctioned as an unsportsmanlike foul (UF) but in case of personal foul (PF) the sanction had to be yellow ball possession – blue team not in foul penalty in the period.
For a better reading and consistent application of the criterion, the referees must identify whether at the moment of the foul contact (not at the moment of the call, which always arrives a moment late) the ball was already in the player’s hand(s) and that the player has already started the upward movement of the arms with a continuous and uninterrupted movement.